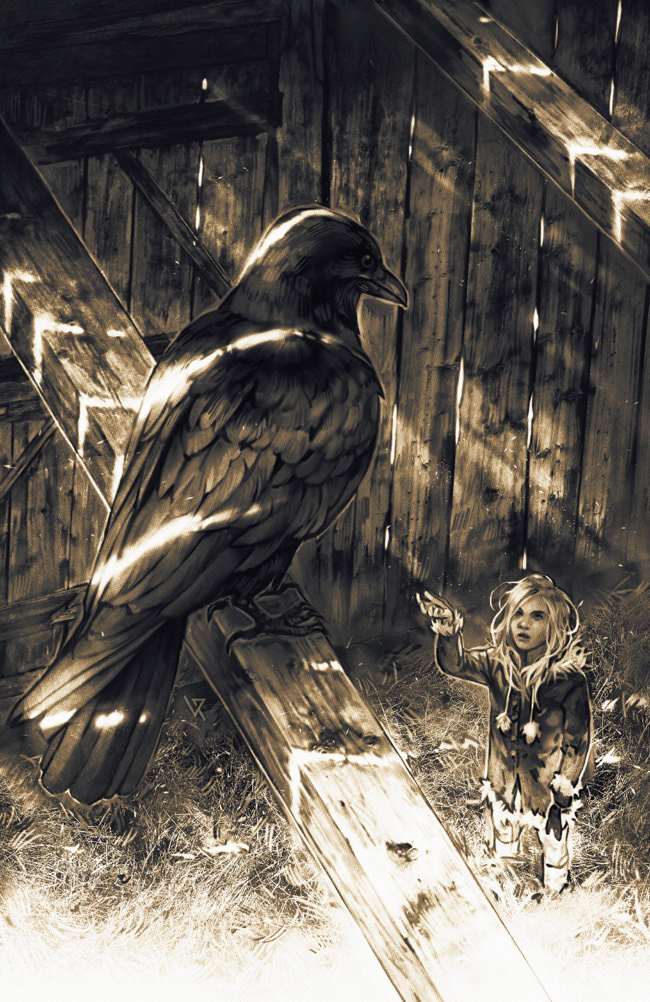 Ama dug her heels into the snow as the old woman yanked her towards the stables.

Even at seven years old, she was strong as an ox, her cheeks ruddy with strain as she fought her grandmother every bitter step of the way.

“I did nothing wrong!” she protested, grasping her elbow as she nearly dislocated her own wrist trying to yank it from the old woman’s calloused grasp.

“You’ve been fighting with the other children again,” came the unimpressed response. “You are far too domineering for such a little girl.”

It wasn’t the first time Ama had heard this. She was often in trouble with somebody’s parents—either for playing too rough, being too bossy, or simply putting the boys in their place when they teased her too much. After one too many squabbles, she was tired of the other children and decided she had no need of them. Her father often referred to her as a lone wolf when the other tribesman complained that his precious daughter did not get on well with others. Today, she had pulled another girl’s hair, all but tearing the pretty near-white locks from her scalp. Perhaps the cause of the outburst was trivial, but Ama was indignant.

“I don’t care!” snapped the elder. “You certainly ended it!”

Throwing the girl into the barn, Ama’s grandmother stood at the entranceway and huffed. “No dinner for you tonight. Your father has enough to deal with. Disciplining you will only add to his burdens.”

The door was slammed shut, leaving Ama in the dark, putrid-smelling hangar. The odor of horse and dog feces hung in the air. Normally, it would be impossible to see if there were any in her path—not with the dim rays shining through the cracks of the barn windows and illuminating patches of the hay-covered ground. But Ama was different. Her eyes saw light where there should have been none.

Sniffling and fighting back the tears with stringent resolve, she waded through the hay until she found a warm spot by one of the stalls. Plunking down, she curled her knees to her chest and pouted, glaring at the darkness as though it had offended her.

It would be a boring, uneventful night with nothing but her own hunger to keep her company. Minutes went by, then perhaps hours—Ama couldn’t tell. Eventually it got colder as the sun began to set, the barn growing darker. Frustrated and restless, she jumped to her feet. Sunlight would at least make the barn less gloomy. Setting a nearby bucket upside against the wall of one of the stalls, she climbed up and wrestled with the window. After suffering loose dust in her eyes and nearly tearing one of her wooly mitts, the wooden flap screeched open with one final punch. Sighing with relief, Ama flopped back down against the wall, satisfied.

Just then, something dropped at her feet, startling her out of her daze. Squinting at the hay between her legs, she spotted a tiny brown worm, wriggling desperately in a futile attempt to escape. As Ama took off one of her mitts and plucked the worm off the ground, she heard the hard flap of wings beating against the air. A raven had flown into the barn and perched himself on a wooden beam, cocking his head and peering down at the young girl.

Ama looked up and frowned. Was he looking for shelter from the cold? It wasn’t unusual to catch the birds of death scavenging in their settlements, but dropping worms at children’s feet was not exactly common. Still, there was something peculiar about this this raven. He did not look any different from the others of his species, and yet she recognized him—felt as though she knew him.

“I don’t eat worms,” she told him with a frown.

The raven’s head canted the other way, his beak parting as he croaked at her.

Handling the worm with care until it lay in the palm of her hand, she stood up and raised her arm, offering it back to the raven. “Thank you, but you can have it.”

With a low purr, the raven swept down from the beam, cutting through the air and snatching the tiny critter from the girl’s hand with frightening precision. She shrieked as he dove towards her, ducking her head and shielding her face from the gust of air. The force knocked her arm back when the scavenger snatched his meal, but when she looked back up again, he was nowhere to be found. Spinning, she searched the window from where she was certain he had come, but the flap was now firmly shut. Had she not opened it?

Suddenly, the barn was dark again, with only the dim rays of the setting sun bleeding through the cracks in the walls.

Do you enjoy my writing? If you want to support me, check out my books, including my dark fantasy debut, The Hollow Gods and its sequel, The Echoed Realm, from The Chaos Cycle duology.

The Chaos Cycle Duology
Shop for Books and Swag

ama The Chaos Cycle The Hollow Gods The Weaver vignette